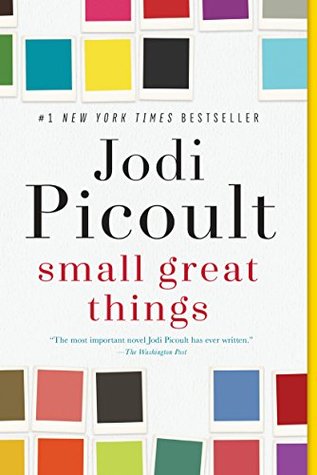 I listened to the Audio Book.

Small Great Things is a story about a African American nurse who comes under attack of a true white supremacist. In a nutshell, this is a book about racism. It also deals with the loss of a child and slew of social aspects. This delves into the background situations and what sparked the behavior from each side of the issues contained. It’s raw with emotion and told in a way I’ve never encountered before.

The storyline hooked me from the very beginning. It moved along at a pretty good pace and had a lot of suspense. Character development was strong and I had no trouble feeling a vacillating empathy and revulsion chapter to chapter. I believe it had the author’s intended effect on me; opening my eyes to what I take for granted as a middle aged, middle class, white woman.

I commend Jodi Picoult for taking on a topic that so dearly needs to be addressed, but so many are afraid to touch because it is entirely too prickly. She did it with grace, style, and effectiveness that I have never encountered before. Small Great Things encompassed so many angles and opinions buried within this issue without attacking and demeaning or making the white people out to be awful – at the same time directing the message at those of us who need to hear it the most.

Nothing, really. I could say it made me extremely uncomfortable, made me cry, and has forced me to examine my own beliefs and behaviors, but I’m not sure that’s a bad thing. This is one of the best books I read during 2019.

I wish I could get everyone I know to read it, at least the women in my life. Not only was the story engaging and well written, but I learned much. It has forever altered the way I think about race, white privilege, and the subsequent things I have always taken for granted.

I truly enjoyed The Secret Life of Bees and The Help, two current examples that deal with racism head-on but they aren’t the same kind of book at all. This one is absolutely worth the time. I’m sure I’m not alone in this sentiment; this book changed me and changed my heart.

Jodi Picoult is the #1 bestselling author of twenty-five novels including My Sister’s Keeper, Nineteen Minutes, The Storyteller, Leaving Time, the acclaimed #1 bestseller, Small Great Things, which explored the issues of power, privilege and race, and has sold more than 1.5 million copies. Picoult’s most recent novel, A SPARK OF LIGHT, published on October 2, 2018, was her tenth consecutive instant #1 New York Times bestseller, and was praised as “Picoult at her fearless best” by the Washington Post.

Picoult lives in New Hampshire with her husband. They have three children.

Learn more about her at: