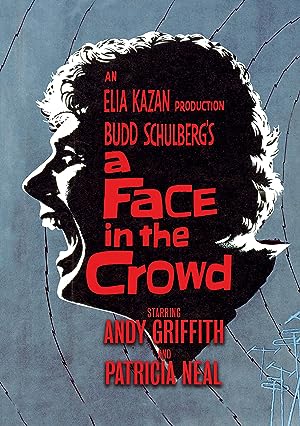 A Face in the Crowd

This movie was the very first on my MOVIE PROJECT list to tackle. I watched it with my husband and as the closing credits rolled, we looked at each other and I said “Well, that’s about as far away from our normal type of movie as we could go. I don’t know what on earth to say about it.” That was three days ago. I’ve been thinking about it ever since, and now, I have a few thoughts to share.

I’m not a fanatical women’s lib advocate, but the behavior of women in this movie – especially Marcia – drove me nuts. Marcia was obviously a smart and talented woman but from the very get go she behaved like a spineless dope. From that very first scene in the jail she stared at Lonesome with these big doey eyes and a goofy smile on her face, with no fear and nothing but admiration – for a jobless, stinky, obnoxious drunk. (Gross!) Throughout, she follows him around like a puppy, giving herself over to him completely – this crude and raucous egomaniac, as if he was some spectacular catch. And she feels betrayed by his actions? He was so far beneath her I doubt she would give him the time of day in real life. Then we have the seventeen year old Betty Lou, fawning over a man twice her age, and behaving like a floozy. And to marry him? She was nothing more than a sexual distraction to him. I don’t buy that a 17 year old would be that attracted to Lonesome. She acted like a child even after they were married, and completely self absorbed. I believe Lonesome would absolutely go after a woman like this – a trophy wife – but one five or seven years older. I think in the late 1950’s there’d be a major outcry over the age difference. Regardless, I simply have some real issues with the way women were portrayed in this movie. I realize 2020 is a long way from 1957, but I just don’t think most women behaved or believed quite like this then.

Andy Griffith playing guitar as Patricia Neal watches in a scene from the film ‘A Face In The Crowd’, 1957. (Photo by Warner Brothers/Getty Images) 1/1/1957

With that being out of the way, let’s move on. Beware of who you believe to is a major theme in this movie. Additionally, I think there is a message of warning about the power of media to be taken away from this, and it is especially pertinent today. Lonesome Rhodes, found as a nobody down-and-out sleeping in a jail cell, rises to stardom by being a paid mouthpiece in the advertising world. As he gains popularity, his ego gains girth and he becomes unstoppable. Everyone, it seems, is wooed by his charm and hangs on his every word. But really, behind the scenes, it’s all a charade and he’s feeding lies to his gullible audience. A smart woman once told me the American public will make good decisions – excellent decisions even – if they are given all the facts. This movie shows clearly what “fake news” is before “fake news” was a coined term and how when you’re not given all the information, what can happen. It shows how intentionally misleading major corporations – and ultimately, our government, can be with the right twist on words. How obscuring the truth can get people to do and believe exactly what they want you to believe. This message should be taken to heart and we should all think twice about believing anything we hear without doing our own research. Just because you like the person saying it does not make it truth.

Overall, I didn’t much care for this movie. I have never watched any of Andy Griffith’s other stuff and can’t compare to that. I felt there was a lot of over-acting and I didn’t like any of the characters. (In fact, it elicited more than one “yeah right” remark and multiple eye-rolls.) It made me chuckle a few times, but there were no major plot twists and the ending, although somewhat gratifying, was not unexpected. Can’t say I enjoyed this one very much. We’ll see if the big ape in the next one does a better job.

Have you seen this one? Do you want to see this one? Tell me what you think in the comments below!