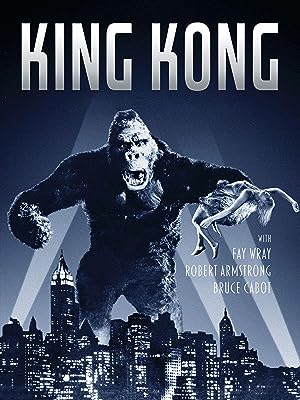 This movie is the second on my MOVIE PROJECT list to tackle. It’s one I hear about regularly but have never bothered to watch myself. (A perfect example of why I’m doing this project.) I intentionally read very little about this movie before I settled in to watch it. I knew it would be old, set in New York, and in black and white. I know the general gist of the story and have seen the iconic ape at the top of the Empire State Building countless times – but I didn’t want other opinions to impact the viewing experience. Honestly, I haven’t ever even watched any of the other versions made of this movie either, so this was fairly isolated and new for me.

Once I’d watched it I did look up what others thought about it. Almost exclusively, the reviews are raving about this original sci-fi-horror flick from the early 1930’s. Most of them praise the groundbreaking film work here and talk about how this is the first “movie monster” ever created. Some go into detail about how great the acting is, and how there are no “extra frames” or unnecessary parts in the movie. A few critics go on about the building of suspense and how you’re lead on a journey with the story. I don’t disagree with any of them, but I’m also not a seasoned movie critic. I can appreciate how this movie was a spectacular thing of its day and how creating King Kong was truly amazing for it’s time.

My true reaction to this movie a bit of a stick-in-the-mud response though, I suppose. First of all, I laughed out loud at the first glimpse of the this massive “scary” monster. Honestly, the Abominable Snow Monster in Rudolph the Red Nosed Reindeer is a bit scarier. I thought he was just funny looking and the expressions on his face totally cracked me up. I’m sorry. I know a lot of work went into creating a terrifying creature. It just missed the mark entirely for me.

Furthermore, and maybe more to the point is the irritation I felt while watching this. Maybe it’s because I’m living in an entirely different time than it was made. I was genuinely appalled with the “good ‘ole white boys” behavior. They acted as if they had every right to be there on this South Indian Ocean island (they did not!) and they had such little respect for their surroundings or the natives of the island. Maybe I’m just too empathetic. Really, it was all fine and good until the beast killing began. Here they are in a place far from home, rip-roaring through the foreign jungle and were confronted with the first of the beasts; a Stegosaurus, and immediately shot it dead. (Yeehaw!) There was no awe – just raw fear and response. And it happened over and over. Every fascinating, oversized creature they came upon was killed, including, of course, the “king” of them all; Kong himself. I hated the stereotypical white male behavior and how there was so little respect for nature. (We won’t even go into the helpless blonde female role.) I felt sorry for Kong too. He was just behaving like a wild creature would and they captured him, tortured him, and when he escaped, killed him. Gak.

In a nutshell, although I respect the filmmaking skills and the story weaving that was produced here, I really didn’t care much for the movie itself.

What did you think? Am I totally off the mark here? Am I missing something? Let me know your thoughts below.