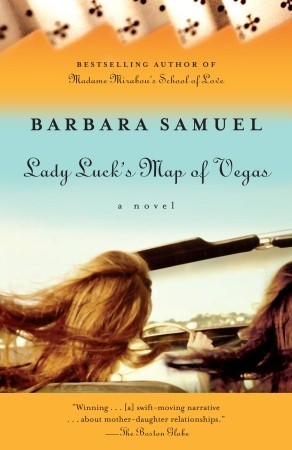 by Barbara Samuel
aka Barbara O’Neal

I read the paperback version.

When your life is turned upside down, why not take a self-discovery road trip to Las Vegas – with your mom? This is a novel about forgiveness and family, overcoming fears and exploring outside your comfort zone.

I am a big fan of Barbara O’Neal’s women’s fiction. (She also writes in a variety of genes under the name Barbara Samuel and Lark O’Neal.) This is an earlier novel written in 2004 and I had a rather hard time getting my hands on it. I ended up acquiring it through my library’s Interlibrary Loan System under her Barbara Samuel name – I believe she just re-released it under the O’Neal umbrella. Not sure entirely as it’s all a bit confusing. I have read almost all of her women’s lit and have been working my way thru each of her novels as I can find them and am always excited to see new releases. See a review for The Art of Inheriting Secrets HERE.

I liked the eclectic mix of characters and their quirky personalities. I enjoyed the overall theme (self discovery and forgiveness) in the story. I thought she did a nice job portraying the Southwest and how colorful it is along with a rather believable portrait of the characters emotions and thoughts.

I liked this story okay, but I was a little disappointed that the authors trademark “foodie element” was completely missing here. (One of my favorite parts about her books.) Additionally, I was really hoping to connect with the main character, India, since she’s a graphic/web designer as am I. There wasn’t a whole lot about her job in here at all.

The story flips back and forth between India and her mother as they travel the southern route thru New Mexico to Las Vegas from Colorado on a road trip looking for India’s missing twin sister. Both have demons to battle and their stories emerge as the trip winds on. It concludes very quickly with all the ends wrapped up, though not entirely believably. It was such a fast conclusion. Especially the mother’s side of things.

Lady Luck’s Map of Vegas isn’t my favorite novel by this author, but they can’t all be a home run, can they? I believe a writer hones their style as they write more and this was somewhat early on and I have truly enjoyed all of her latest works. That being said, it wasn’t terrible, and I enjoyed more of it than I didn’t – it just wasn’t my favorite. If you’re a chick-lit fan, this might hit its mark with you.

Barbara Samuel (also known as Barbara O’Neal) is the bestselling author of more than 40 books. Her books feature strong women, families, dogs, food, and adventure—whether on the road or toward the heart. Now living in her hometown of Colorado Springs, Barbara lives with her partner, Christopher Robin, an endurance athlete, along with her dog and cats. She is an avid gardener, hiker, photographer and traveler who loves to take off at dawn to hike a 14er or head to a faraway land. She loves to connect with readers and is very involved with them on the Internet.

Are you an Barbara Samuel or Barbara O’Neal fan? Have you read this book? If so, what did you think? Let me know if the comments below.