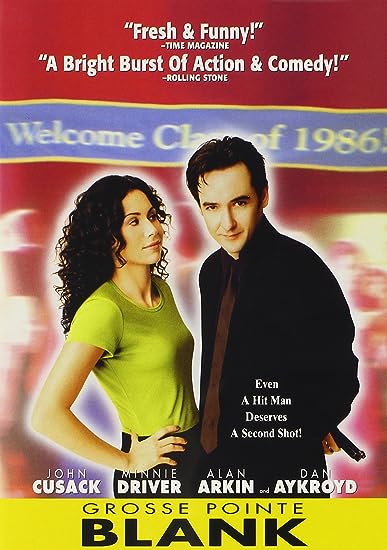 This is a “killer” comedy!

A hitman goes back to his hometown for his 10-year high school reunion. This great little action-comedy will catch you off-guard with the performances of John Cusack and Dan Aykroyd as the rival gunmen going head-to-head. There are also some surprisingly awesome fight scenes.

I have not previously seen Grosse Pointe Blank but I have heard about it for years. (And, why I watched it.)  Going into it, I assumed it was going to be a comedy and wouldn’t be very deep – and I was spot-on. A social hitman? What else could this possibly be? Not a serious two hours for sure! I enjoyed the throwback to the 90’s while watching this; the clothing, the hair, the cars – very 90’s indeed. There were several one-liners that got me to chuckle. It was lighthearted and an easy watch. And it was fun to see two classic movie stars in their younger days.

In short, most of it. I’m sorry – this just isn’t my kind of movie. I suppose my sense of humor might be stilted, because I find most comedy movies inane and irritating. I just can’t get into them.

More or less, the entirety of  the Grosse Pointe Blank plot is entirely unfathomable. Even considering it’s set in the nineties, without the technology of today, it’s lacking. It might have well been made as a cartoon for how realistic the story is.

I suppose, if you’re a guy, the fight scenes might be good. However, I find the majority of intentional damage in the movies to be irritating, with this one being no exception. (Blow up the convenience store, destroy her home with bullets, etc.) I don’t think that’s cool or makes for a better movie. Kinda like unnecessary sex scenes.

And the characters… no. The spineless psychologist? The gorgeous ex girlfriend, just waiting around for him? The rival hitman? That dual personality secretary?! All of them were corney and somewhat creepy. Oh – and should we mention the old high school friend that just helped dump a body with basically no questions or moral qualms? Gee whiz. No. All of them. What an unlikely cast. Yes – I know. Comedy. It’s apparently not supposed to be anchored in reality at all.

Glad I watched for the cultural references it but it reiterated in me how much I dislike slapstick humor.