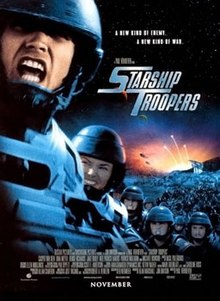 THE ONLY GOOD BUG IS A DEAD BUG.

Set in the future, the story follows a young soldier named Johnny Rico and his exploits in the Mobile Infantry. Rico’s military career progresses from recruit to non-commissioned officer and finally to officer against the backdrop of an interstellar war between mankind and an arachnoid species known as “the Bugs”.

So. I thought I might have seen this one before. Within the first three minutes I was sure I had not. This is movie falls squarely into the sci-fi drama of my husband’s world. He was tickled when he saw it was on the list. He’s even read the book. But, I have not. This was an all new experience for me.

Did I like it? Well… yes and no. It was entertaining for sure. It had a predictable yet fast paced story line. The characters, though not well developed were believable enough. It had some extremely serious parts and some slapstick funny lines. I’m not a seasoned movie critic, but I think I picked up on some satire in here too.

There’s something I can’t quite put my finger on that I didn’t care for. I think it was the cheesy breaks between each scene from the “government”  and I believe the Starship Troopers would have been better without these diversions from the storyline. I know – they were filling in gaps of info for the viewers but I didn’t like it.

And those bugs. Gross. GROSS!! I agree and empathize completely with Carmen here:

And the unnecessary flashes of boob. C’mon! It didn’t add a single thing to the movie and was completely for show.

it was okay. I didn’t love it but I sure liked it better than King Kong!