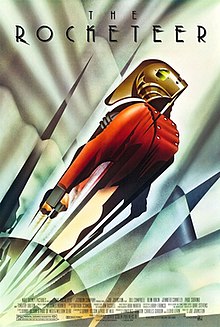 Set right before WWII, a young racing pilot, down on his luck, stumbles upon a wearable rocket. Little does he know there are various villains after the top-secret invention and he – and his girlfriend – get all tangled up in it. Will the Rocketeer get caught or save the day?

This was a charming adventure story; the main character is an innocent hometown boy who loves a girl. He just wants to be something special and make something of himself. There wasn’t any overt sex, extreme violence, or foul language, which seems to be somewhat of a rare find in our current day movie selection.

I didn’t once think about special effects during the whole thing, which means even though they were old-school (no CG) they were well done.

I enjoyed the setting and being “taken back” to the Hollywood of the 1930’s – especially the South Seas Club.

The plot was not very unique and somewhat predictable.

Although it was well-done, as Cliff was flying around with this jetpack on his back, I couldn’t help but think his legs would be burned to bits by the flames.

It was cute. It’s a Disney production – which I didn’t know until I did some research on it. (That explains the innocent component of it as it’s geared toward a younger crowd) I didn’t love it, but certainly didn’t hate it. I had no idea this one even existed and is a prime example of why I’m watching these old flicks. If you haven’t seen it, it’s worth the time.