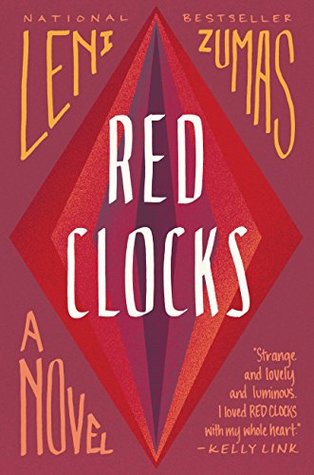 I read the Kindle eBook.

Red Clocks is a story set in a (near?) dystopian future not so kind to women’s reproductive rights. It’s illegal to have an abortion, IVF is no longer allowed and embryos have rights. The story follows four women, each with her own set of struggles to face in this new world.

This was a new and creative story line. It tackled some very prickly issues without being too confrontational.

I felt akin to several of the characters due to my own past struggles and acutely felt their emotions. Infertility and the frustrations involved were well covered. Being frustrated in the day-to-day grind of motherhood, yep, Zumas got that right too, if not a bit overstated. Pregnancy? Feeling like an outcast? There’s a lot of what it feels like to be a woman divulged here.

It is very thought provoking and was just verging on political, without ever bringing politics directly into the narrative. It was an engaging and enjoyable read, overall.

As a woman who has adopted, and been through the frustrations of infertility, much of this book resonated. Parts of this book disappointed me deeply, and a little bit of it just straight ticked me off. Adoption is a difficult process and it was really minimalized as a legitimate option in this story.

I am, and will always be, an adoption advocate. The choices made by the teenager frustrated me to no end. She never really saw her pregnancy as a life. Just a clump of cells to put in the trash and be done with. Damned be any other option – she simply didn’t want to hear it, no matter how much good could result from another choice.

I think that’s one of the biggest problems we have right now in our current world – many women don’t think of their unplanned pregnancy as a life they’re growing. I do – and very strongly at that. So yeah, this part where she refused to consider any option but getting it out of her pissed me off.

That being said, I understand why she’d want that option. I empathized with her fear. (The author made it clear why safe abortions are practical and necessary.) My beef with this teen is that she never considered anything else. Further, adoptive families were downplayed and regarded as somewhat lesser in this book. And sure, in real life, not all adoptions result in spectacular family situations, but neither do traditional family settings. I could go on and on about my personal belief structure and how I think things should be – but my overarching point is there were some very valid points of views that were completely omitted, dismissed or seriously downplayed here in lieu of a specific message to the reader.  Adoption can bring joy and happiness to all parties involved and be a miraculous, wonderful thing. Being childless isn’t a terrible life sentence either.

Yes. It was a great story and well written. Enjoyable from beginning to end. Might introduce “the side not yours” of the women’s rights issues in a easily digestible way.

Leni Zumas’s national bestselling novel RED CLOCKS won the 2019 Oregon Book Award for Fiction and was shortlisted for the Orwell Prize for Political Fiction and the Neukom Award for Speculative Fiction. The novel was a New York Times Book Review Editors’ Choice and was named a Best Book of 2018 by The Atlantic, the Washington Post, the Huffington Post, Entropy, and the New York Public Library. Vulture called it one of the 100 Most Important Books of the 21st Century So Far. Red Clocks has been translated into eight languages.

Zumas is also the author of FAREWELL NAVIGATOR: STORIES (2008) and the novel THE LISTENERS (2012). Her stories, essays, and interviews have appeared in Granta, The Times Literary Supplement, Guernica, BOMB, The Cut, Portland Monthly, Tin House, and elsewhere. She has received grants and fellowships from the Lower Manhattan Cultural Council, the Barbara Deming Memorial Fund, the Regional Arts & Culture Council, and the New York Foundation for the Arts. Zumas lives in Oregon and teaches in the creative writing program at Portland State University.

Have you read this book? If so, what did you think? Let me know if the comments below.